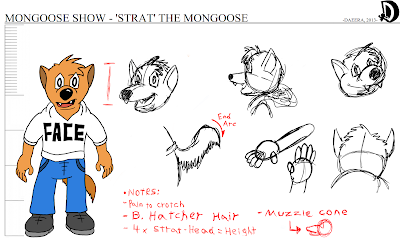 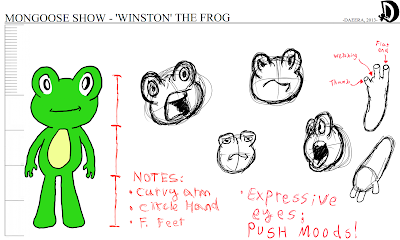 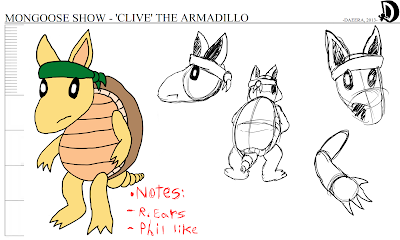 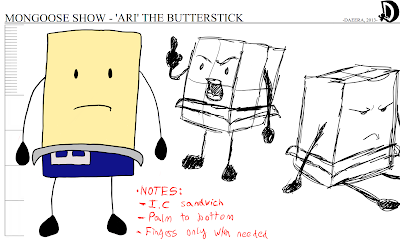 My friend Rick Rodas has been writing a show in conjunction with our circle of friends called Mongoose Show. I've been asked to animate it, as well as to assist with the character designs. I didn't come up with the initial concepts, but they all have some of my own creative touch to them.

Strat the Mongoose, Winston the Frog, Clive the Armadillo and Ari the Butterstick. These four strange buddies live together in a home where they are haunted by their dead landlord to make up rent each month. They can never seem to get their act completely together, but they usually figure out how to get by amidst their crazy and unnecessary misadventures.

While I understand model sheets were used in animation studios for the reference of the many animators to construct a character the same way, I need to understand the construction of the characters from the get-go. I view a model sheet as the experimental palette for character construction. If something doesn't work on a character, you'll most likely notice it at this point.


Sunday, October 6th, 2013.
Updated the designs. Here are some changes;-Changed Winston to be more expressive, added fingers, but only kept it to three (including thumb).-Changed the ears for Strat, as well as slight mouth/head construction.-Clive needed an article of clothing to wear, but I wanted to keep it to something small/simple. Tried a headband.-Ari's shade of blue was changed. This is because it was too close to the shade of blue Spongebob would wear in certain episodes of SBSP (at the beach, usually). Slight emotional construction in order to push moods more successfully.
Posted by AdamSakuru at 16:36